Trip Back to World War II for Junior School

Year 4 have been learning all about World War Two in their history topic. This week they have taken a trip to Churnet Valley Railway to put that learning in to practice, spending the day as evacuees and experiencing life as an evacuated child.

The villages along the Churnet Valley line took in many evacuees during the war, mainly from Manchester. Children arrived bewildered and frightened to then be allocated to people who often didn’t really want them. The children who weren’t taken up were walked from door to door to be forced upon families to take them in.

The boys began their day by taking a trip on the steam train, which for some was very exciting as it was their first time. In the middle of the train trip the air-raid warning sounded and the boys were plunged into darkness in the blackout tunnel.

The train finally pulled in to Cheddleton Station and the boys assembled on the platform ready for the ‘child auction’. Harjan and Nicholas were quickly snapped up by the farmer who was looking for strong boys to help on the farm, and Spencer was taken by the butcher.

They then moved on to various activities which included how identify friendly and enemy planes, learning about what life was like for the Stationmaster, Mr Ryder, and his wife and children, and then a session on what an evacuee would pack in their suitcase to take with them – and what they would be allowed to take.

It was back onboard the train for lunch and the journey back to Froghall station where they were met by Doreen who was evacuated to Cheddleton in World War 2 at the age of 7. She told the boys about her experience, what life was like and how she felt as an evacuee.

The afternoon finished with a tasting session on the food we ate during the war, which included tasting bread pudding and woolton pie, and then a trip to the shop to find out all about rationing, ration cards and identity cards and the chance to spend an old penny on a souvenir to remind them of their trip.

The boys had a busy, fun day with most agreeing that one of the best bits was the blackout tunnel!

Mrs Jackson, Year 4’s teacher said: “It’s really important for the boys not only to learn about World War 2, but also to try and experience it. Days like this run by Churnet Valley Railway and their volunteers are invaluable.”

See the pictures from the day – 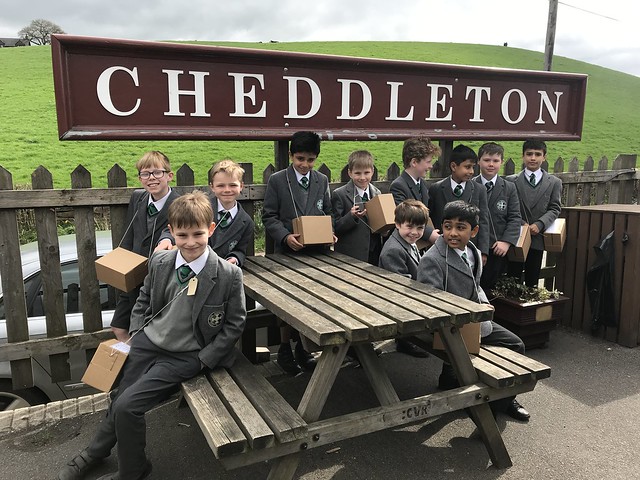