Derby Grammar School’s House Drama competition was based on episodes of Friends this year. Atkinson House scooped the top prize with their performance of the episode ‘The One With Unagi’ and Elliot Butterworth won the Best Actor award for his performance of Ross in the same episode.

The House Drama competition is always eagerly anticipated. Pupils across year groups 7 to 13 come together to get involved both on stage and behind the scenes, often having little or no acting experience, and sometimes discovering new talents!

Over a short period of time this year the pupils adapted the episodes for stage, learnt lines and rehearsed. The evening saw some unique presentations, creative props and amazing costumes.

Mrs Watson, Bemrose House Master, began the evening by reminding the audience of how old the Friends series actually is. It is 25 years since it first aired and 15 years ago since the last episode was shown. Despite it being older than most of the school’s pupils it was recently voted one of the most popular TV shows in the UK for young people.

The performances were judged by Lea Holmes who has appeared in several performances at Derby Theatre and Guildhall, as well as writing three pantomimes which have been performed at Derby Grammar School.

Lea commented that all performances were superb. He said: “All of the casts brought each episode to life, everyone should be very proud of what they have achieved.
In each performance the Ross character was great. I would also like to congratulate Paul Phipps who despite being quite tall convincingly portrayed a small child, complete with high-pitched squeak, in Blackton House’s performance of ‘The One Where Ross Is Fine’.”

Year 7 pupil Will Flear was also commended by Lea for his performance as Mrs Green in Bemrose House’s performance of ‘The One With The Baby Shower’.”

Commenting on the win, Atkinson House Captain, Max Morley, said: “I didn’t expect us to win, especially when Elliot was announced first as the best actor.

I played Phoebe, which I had to do with an Australian accent as I couldn’t master an American one. Phoebe’s a bit weird, and so am I, so I enjoyed playing her!

I think we finally started to enjoy acting out the episode just a couple of days before the final performance, once everyone had learnt their lines and rehearsals finally started going well.”

Year 13 student Huzzy Muhammad played Rachel. He said: “When I left the stage I didn’t feel like it was a winning performance, but then everyone started saying how good it was so I thought we may have a chance of second.”

Max added: “The last time Atkinson won the House Drama competition was 9 years ago in 2010, so we were ecstatic to win.” 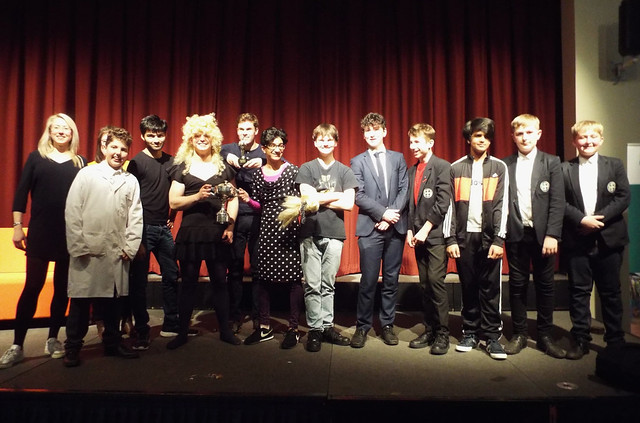